Our latest news and interest stories

On Friday 1 February the Mariswe name became official and UWP Consulting branding gradually disappeared from our office walls, our desks and our computers.

On 8 February, staff gathered in Mariswe’s offices around South Africa to celebrate this great milestone. This was an opportunity for everyone in the company to sign a pledge to improve the lives of people in our communities as we pursue our personal goals through our work.

The braver among us donned masks, hats and feather boas to immortalise the moment in photo booths, with joy and camaraderie palpable in the resulting photographs. All staff received gift packs including branded t-shirts, USBs, notebooks and pens.

The firm’s HYPE members (young professionals) got stuck in to ensure the success of these events. The general order of the day was presentations by management on the Mariswe name change and logo design, together with a multi-media presentation summarising the reasons for the change and our new values, backed by words of explanation and encouragement from our regional managers. 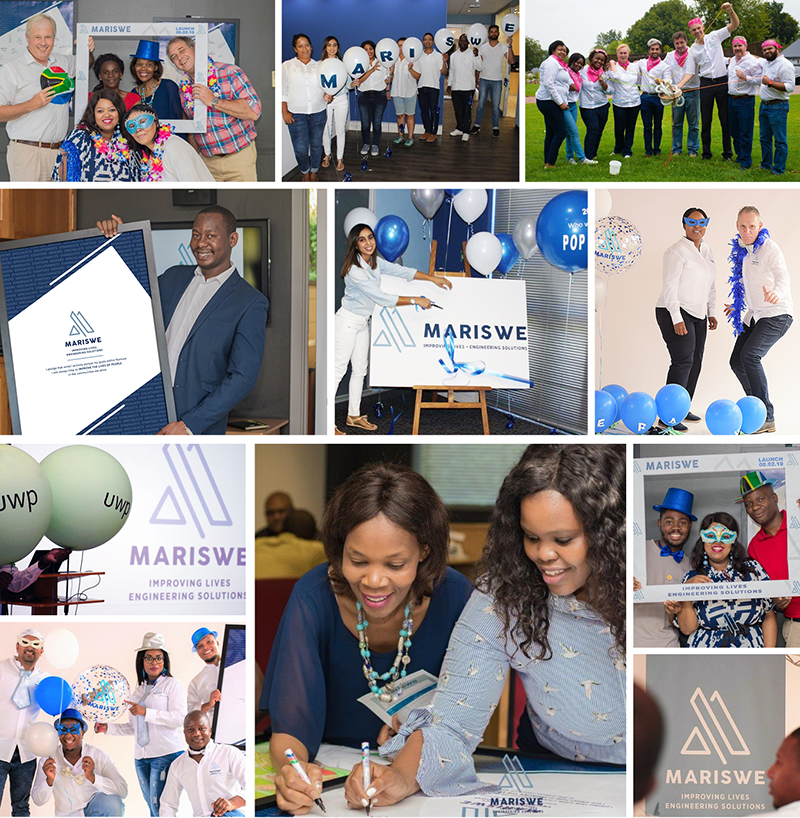 Inland provinces
Sixty-five staff from the Bryanston and Pretoria offices gathered at Zulu Nyala Country Manor in Fourways for a day of activities around the theme of a caterpillar (UWP) transforming into a butterfly (Mariswe).

The event was planned as a surprise within the Inland Region’s annual lekgotla, resulting in significant savings on the cost of the venue. The new name was unveiled by popping seven green UWP-branded balloons which revealed new balloons spelling out MARISWE.

Everyone had a lot of fun engaging in team building activities and inspirational video messages from staff recorded by Boitshoko Pege were viewed at the event. He also took photographs of everyone in their smart new Mariswe branded shirts.

KwaZulu-Natal
The newly painted and branded Pietermaritzburg office had a festive air on 8 February as 39 staff from Pietermaritzburg and Richards Bay celebrated the birth of Mariswe with a spit braai lunch. The event was captured on camera by HYPE member Sifiso Dlamini.

Staff signed the Pietermaritzburg and Richards Bay pledge posters and posed for pictures at the photo-booth to capture the happiness and excitement around a new name and new beginnings.

Asked to comment on the name change, one staff member summed it up by saying, “It’s a chance for a new beginning that will build on the strengths of the past.” Another shared this message: “Staff should embrace MARISWE and consider it as a team effort to win new work and build on the legacy already created with a sprinkle of young talent.”

Eastern Cape
The afternoon of 8 February saw 28 staff in East London and 11 in Mthatha downing tools to celebrate the company’s transformation at their respective offices.

To generate excitement in the week leading up to the launch, puzzle pieces on Easter eggs were hidden around the East London offices. As the pieces were discovered, an image of the new logo slowly came together.

Regional manager Wayne Ketteringham paid tribute to the valuable history UWP has brought to Mariswe at the launch, sharing hilarious legendary “tales” of his 20 years with the company.

A ceremonial lowering of UWP banner and raising of the Mariswe banner symbolised the transition, while a customised version of the “30 Seconds” board game tested our knowledge of the company and its people.

The Cape Town office bucked the trend by choosing to celebrate on 17 January, a great way to get the 21 staff members attending fired up and ready for the year ahead.

The theme around our new blue branding was extended from the balloons to the blue and white dress code and even to the colour of the welcome cocktails/mocktails.

A special video written by Val de Koker and directed by Adrian Skea showed a typical day in the life of a UWP employee, ending with two mascots wearing Mariswe branded clothing entering the scene as UWP slowly faded out of the shots.

The old UWP clothing and stationery was collected at the launch for donation to various schools. 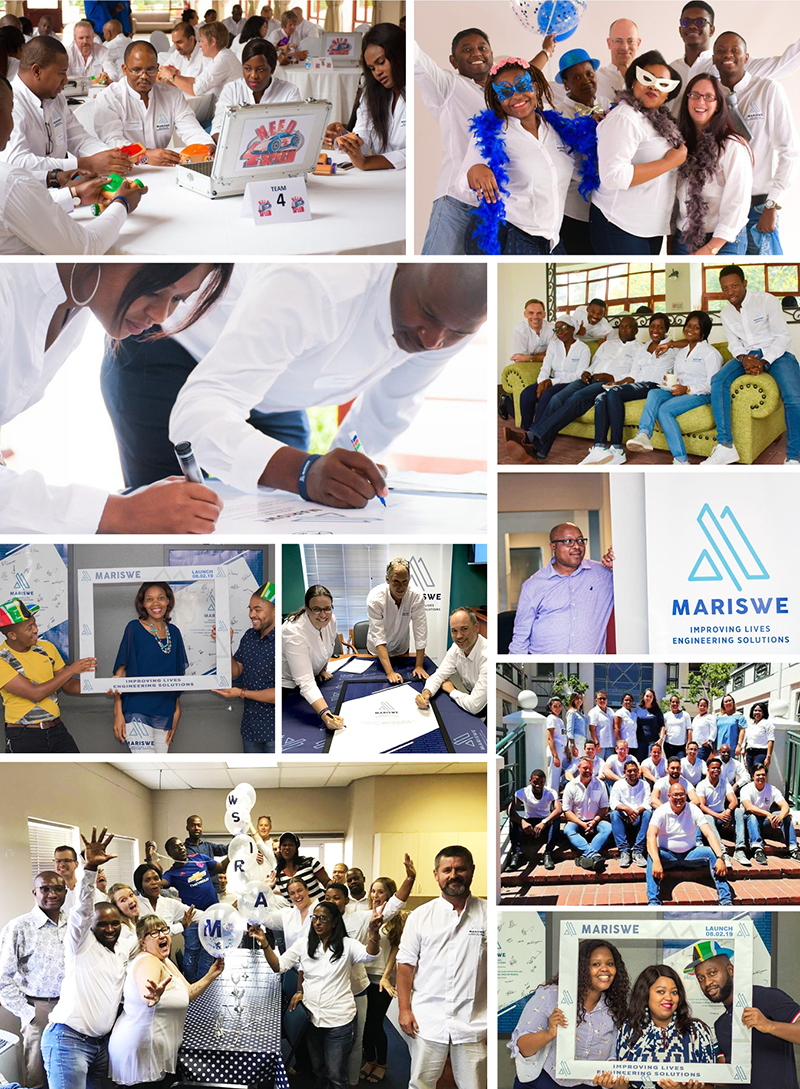