Our latest news and interest stories 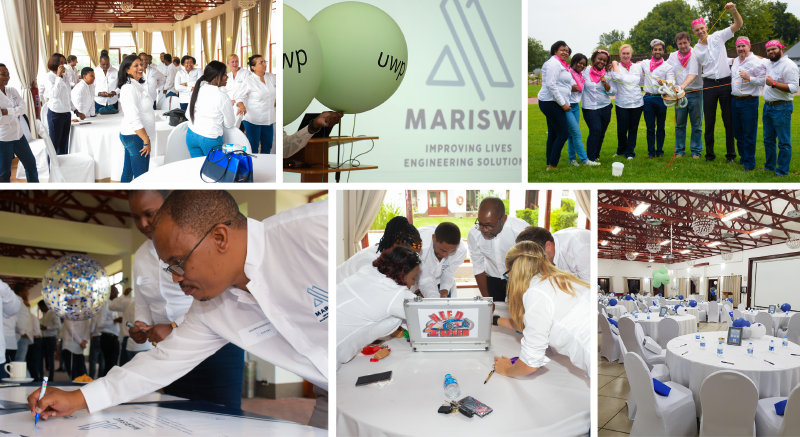 The committee held its first meeting on 11 January 2019, followed by four more preparatory meetings. The committee was divided into four teams that respectively took care of office transformation from UWP to Mariswe; decoration and entertainment; the programme; and photography/videography.

Sixty-five staff from the Bryanston and Pretoria offices gathered at Zulu Nyala Country Manor in Fourways for a day of activities. The event was planned as a surprise within the Inland Region’s annual Lekgotla, resulting in significant cost savings as the Lekgotla covered the venue and seating while the internal launch budget covered the food, drinks and entertainment.

The venue looked beautiful, with butterflies in Mariswe colours as centrepieces to the tables, explaining the theme of a caterpillar (UWP) transforming into a butterfly (Mariswe). Each guest received a corporate gift pack including branded t-shirts, USBs, notebooks and pens.

Inside seven large green UWP-branded balloons were hidden blue balloons spelling out M-A-R-I-S-W-E. Following the launch announcement, they were popped to symbolise the release of the old name and the unveiling of the new name.

A DJ kept the excitement going and everyone had a lot of fun engaging in team building activities. Boitshoko Pege presented video clips filmed in the preceding weeks of employees sharing messages around the excitement of the name change. He also took photographs of everyone in their smart new Mariswe-branded shirts. Staff dressed up masks, hats and feather boas to immortalise the moment in the photo booths. 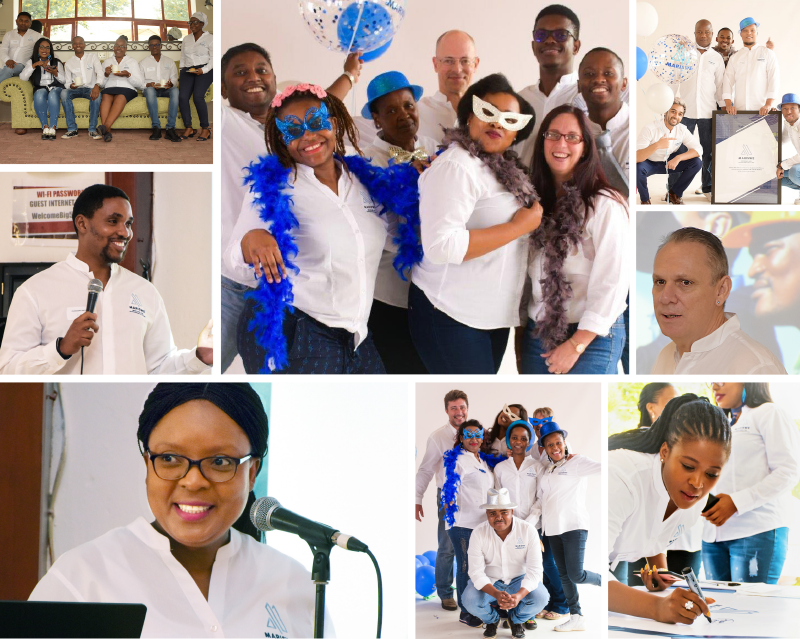 The organising committee took Mariswe’s slogan of “Improving Lives. Engineering Solutions.” seriously, asking staff to donate all their old UWP branded clothing for charity and awarding gift hampers to the staff members who donated the most items.

Olebogeng Mothelesi, the Lekgotla chairperson, doubled as master of ceremonies for the launch programme. Regional manager Vuyo Booi welcomed everyone, and the multi-media presentation on the name change set the scene, with further explanation of the name, logo and pledge by COO Gareth Coleman. A recorded presentation on the direction of the company by CEO Nonkululeko Sindane was next on the schedule, followed by a word from the YPs by Jerry Lekalakala.

Then came the team building activities to get the brains and bodies working. The programme ended with entertainment by the DJ, photo booth pictures and refreshments. During programme breaks everyone signed the pledge to help improve the lives of people in our communities, and the video clips created by Boitshoko were screened during lunch.

The event was a great success and the general feeling was an abundance of love for the new Mariswe name.

The office transformation team had its hands full on the weekend following the launch changing décor, wall colours and reception logos as a surprise for employees returning to work the following Monday.